Basilica di San Petronio | Martyrs' Cross
The Martyrs' Cross since the 8th to the 9th century, originally located at the beginning of Via Battisasso, in 1798 it was moved inside the basilica.
7178
page-template-default,page,page-id-7178,page-child,parent-pageid-6949,ajax_fade,page_not_loaded,smooth_scroll, 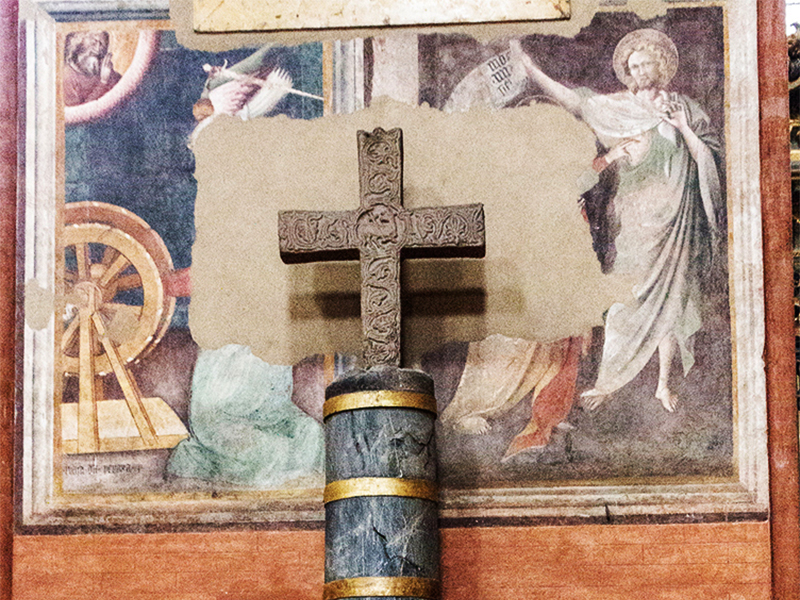 The Martyrs’ Cross is one of the four crosses that, according to tradition, St. Ambrogio placed around in the ancient city, as a spiritual defense of it. It dates from the 8th to the 9th century and was originally located at the beginning of Via Battisasso – about half way of today’s Via Montegrappa – near the church of the Saints Fabiano and Sebastiano, later destroyed. In 1798 the French troops moved the cross inside the basilica,on the right nave.

In the central part the mystic lamb is sculpted in bas-relief, while the arms are animated by a rich vegetal decoration. On the back side some palmettes adorn the horizontal arm and running-knot shaped vertical twistings, typical Lombard-inspired motifs.