Basilica di San Petronio | Bell Tower
The bell tower of San Petronio has 4 bells: the big, the scholar, the mezzaella and the small one. Since 1920 the Campanari Bolognesi Union is located in the bell tower.
bell tower san petronio bologna
7036
page-template-default,page,page-id-7036,page-child,parent-pageid-6949,ajax_fade,page_not_loaded,smooth_scroll, 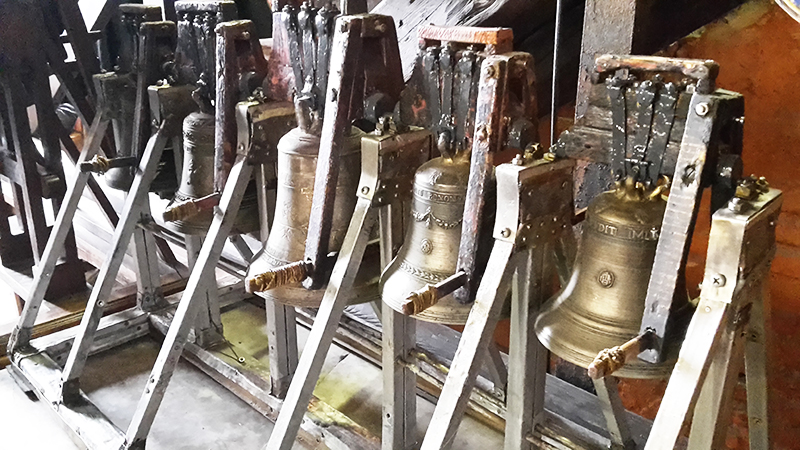 The Big, the scholar, the mezzanella and the small one. Four bells for St. Petronio’s bell tower. The largest one, called “la grossa” (the big one), weighs 24 quintals and was forged in 1492, together with the mezzanella, of 5 quintals. Then there is the “mezzana” (the middle one), made in 1584 and renamed “the scholar” because it dictated the timetable of university lessons in the nearby Archiginnasio. Finally, the small one weighs 4 quintals and was merged in 1578. Where there are bells there are also the bell ringers. In fact in the bell tower of the basilica has been home since 1920 the “Campanari Bolognesi” (Bolognese bell masters), founded in 1912.

The bell tower was built by Giovanni da Brensa between 1481 and 1492: It was placed over the relics’ chapel,to which the walls are in fact enlarged. There are no particularly elaborate or sumptuous decorations, only the alternation between brick and marble visible in the mullioned column of the belfry, which recalls the style of the basilica.

From the bell tower you can hear the sound of the four bells, made manually thanks to the characteristic bolognese system called “doppio”: by a team of bell-masters formed by a minimum of six members up to a maximum of fourteen. Among the techniques used to ring the bells there is also the “scappata”, that is when the instruments, starting from an initial position with the mouth down, receive thrusts thanks to which they can make 360 ° turns.