Basilica di San Petronio | XXI. Chapel of Madonna della Pace
This chapel was once dedicated to Santa Maria de' Rustigani, named after one of the churches demolished to make room for the Petronian basilica.
6731
page-template-default,page,page-id-6731,ajax_fade,page_not_loaded,smooth_scroll,

This chapel was once dedicated to Santa Maria de’ Rustigani, named after one of the churches demolished to make room for the Petronian basilica.

The beautiful gilded and lacquered wooden altarpiece, by the baroque carver Francesco Casalgrande (1727), encloses a paneled front, around 1525 made by Giacomo Franciache. The artwork depicts the Eternal Father in the glory of angels and four young musicians (some think that the figure of the Father has been repainted by Guido Reni). 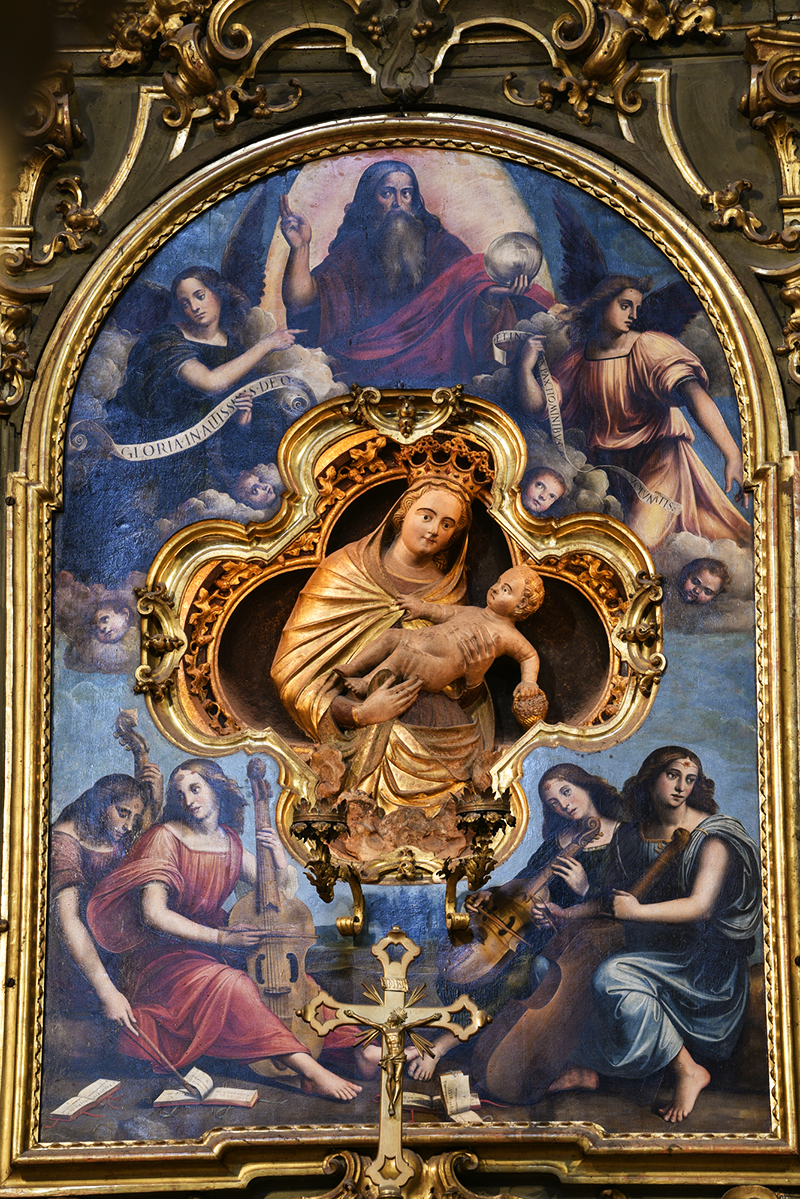 A cruciform opening, in the center of the frontal, highlights the image of the “Madonna della Pace”, carved in Istrian stone by the German sculptor Giovanni Ferabechnel in 1394 for the facade base, then, repeatedly and heavily retouched.

On the left is a terracotta statue of the fifteenth century that represents the supine figure of the soldier Scipione degli Eremiti who, according to a legend attributed to the historian Cherubino Ghirardacci (1519-98), in 1405, upset for having lost a considerable sum of money at the game, he had flung himself against the Marian image, at the time placed outside the basilica, truncating with the dagger two fingers to the Child. 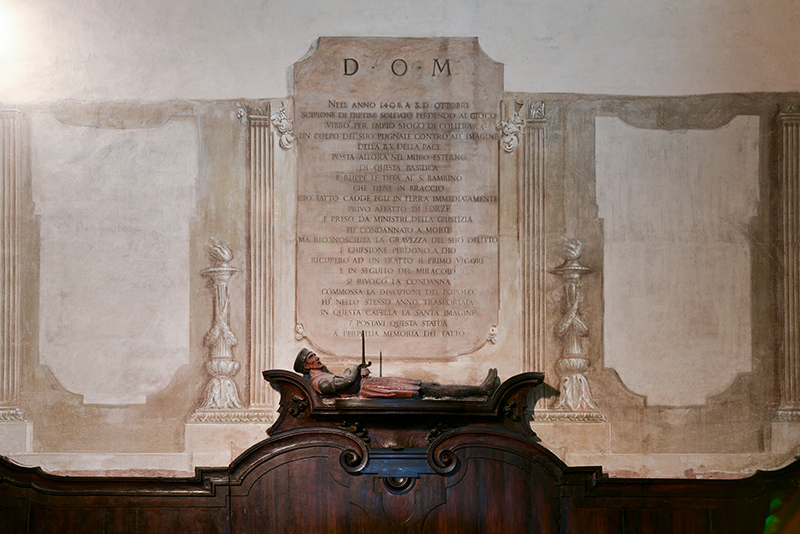 Scipione was condemned to the gallows, but then, vowed to God and the Madonna, miraculously remained unscathed and, consequently, the Praetor spared his life. The soldier then placed the image inside the temple which, since then, is deeply revered by the faithful.

The chapel was decorated for the first time at the beginning of the 15th century and, later, around 1520 by various painters including the artists Bagnacavallo, Aspertini and Girolamo from Treviso.

However, all these works disappeared in 1727, when the chapel gained its current appearance: two large side dossals which support, on the left, the terracotta statue of Scipione degli Eremiti lying with the dagger in his hand (by an unknown artist on the 15th century) and covering the few traces of the votive figures painted by Giovanni da Modena, Francesco Lola and other authors around 1420.

At the center of the floor is the tomb of Bartolomeo Dal Monte, (Bologna, November 4, 1726 – Bologna, December 24, 1778), whose body was moved on site in 1808. He was an Italian presbyter, an important preacher of popular missions.

He was beatified by Pope Giovanni Paolo II on the 27th of September,1997 in Piazza Maggiore.