XIX. Chapel of the Cross

The chapel of the Holy Cross Belongs to the “Società dei Notai” (Notaries’ Society). It has a rich marble transenna with iron grates, made by carvers belonging to Albertino Rusconi’s workshop in Ferrara between 1481 and 1483. The transenna bears the Notaries’ Association coat of arms and the Pietà in the lunette. In the latter appear the portraits of the first Society’s Proconsuls, Rolandino Passaggeri and Pietro da Anzola.

On the altar there is a Crucifix painted on an old-fashioned shaped table with paintings of an allegorical pelican, the Madonna and St. Giovanni, at the edges of the Cross. This is a singular work of high quality expressiveness made by the Bolognese Ercole Banci (early 16th century).

The Gothic-Coating of the Crucifix and the pedestal are works of Achille Casanova (1907) who also restored the fictitious brocades’ base.

This stand framed various votive frescoes, all executed in the first half of the fifteenth century, by many artists.

Following are some frescoes from the early years of the 18th century ruined by humidity infiltration. All of an unknown hand, including a Madonna with a bearded saint and a bishop (of whom only the heads are left); St. Anthony Abbot (the lower part of the figure is missing). 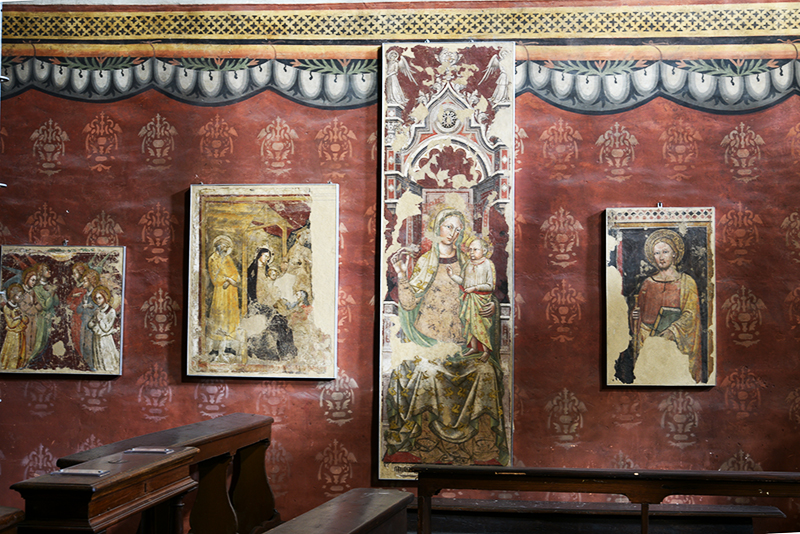 Finally, there are fragments of detached frescoes from other places in the basilica: group of musician angels, crib and Madonna with the Child on the throne, all ascribable to Pietro Lianori.

The famous chapel’s glass window was executed between 1464 and 1466 by the German Dominican friar Jacob Griesinger (the Blessed Giacomo from Ulma), designed by Michele di Matteo. You may find depicted in the rose window the risen Christ and in the double-arched windows the usual motif of the Annunciation with various Saints. Particularly pleasing is the chromatic scale of the window, that alternates bright and radiant tones to very intense reds, creating simultaneously precious and joyful effects.

In the pylon between the nineteenth and the twentieth chapel there is a memory of Cardinal Carlo Opizzoni, archbishop of the city during the Napoleonic period who died in 1855.