THE SUNDIAL OF ST. PETRONIO’S BASILICA

1. The construction of the Sundial

1. The construction of the Sundial

A first, the Sundial was built in San Petronio by Agnazio Danti, a Perugian Dominican professor of mathematics at the University of Bologna, in 1576, and was then verified by Giovanni Battista Riccioli and, later by Francesco Maria Grimaldi, in the middle of the following century.

This line crossed the central nave and had light from a hole made at the extreme point of the wall that closed the left nave.

Danti’s work was destroyed in 1653 during the lengthening of the church, making the sundial unusable. Gian Domenico Cassini, a great Italian astronomer, took this opportunity to propose the construction of a new and greater solar instrument.

His intent was to create an instrument that would be able to improve the astronomical knowledge conducted up to those years.

Cassini, instead of placing the hole in the wall as Danti had done, decided to run it at the top of one of the vaults of the left nave. The line would have occupied most of this nave, ending its last part in the central one.

To do this he had to choose a point where the columns of the church did not interrupt the development of the Line on the ground, which is why it had to have a forced North-South route.

The columns had in fact led Danti to a tracing error, avoiding him to obtain accurate results. It would have passed by touching the first and second columns, keeping the line entirely horizontal from one Solstice to the other. So, its width would have been, considering the local latitude, about two and a half times the Gnomonic Height.

Following these considerations, Cassini informed Bologna’s Senate and obtained by the latter the approval to start the works.

After defining the exact position of the hole on the vault, a block of marble was cemented at that point with a wide opening in the center and in that horizontal plane a thin brass plate was fixed, in the center of the real hole.

Its diameter corresponded to the thousandth part of the Gnomonic Height and a partial opening of the roof was also made to facilitate the entry of the sun’s rays during winters.

From the center of the Forum came a thin copper wire attached to a weight which arrived in a water container that was used to amortise the normal oscillations of a so long pendulum. All this was needed to determine the Vertical Point on the floor.

We then proceeded to determine the precise size of the Gnomon, that is, the distance between the sundial hole and the floor. It was found that it corresponded exactly to 1000 inches of Paris Foot, and about 71 feet and 5 inches of Bologna Foot (27.070 meters).

Before the 1655 Summer Solstice, the perfectly horizontal floor section, on which the sun’s rays would later be projected, was prepared. 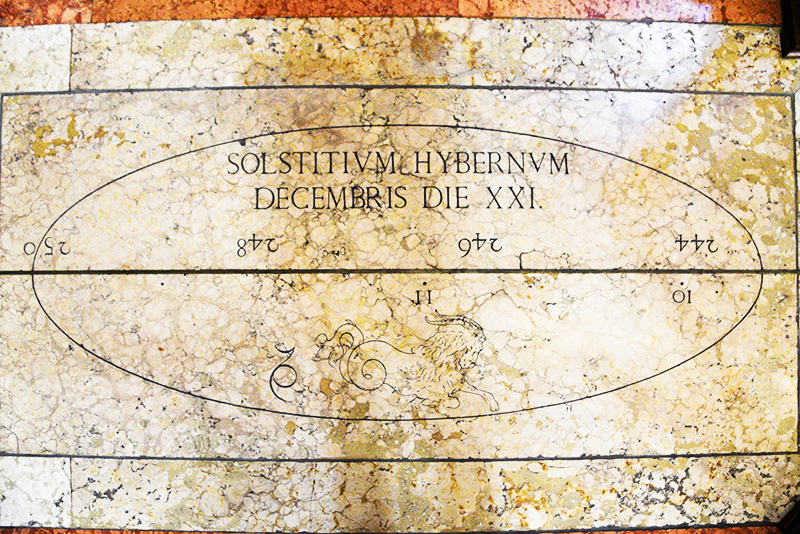 Everything was verified with a series of water levellings. On that day the sketch of the margins were drawn on the floor with a pencil, that continued transversely on the North-South axis.

Using a special wooden bar as if it were a compass, he placed one end on the Vertical Point, and with the other extremity he found the shortest distance between that point and the edge that the solar image had described on the floor, thus obtaining a second point.

The direction of the precise Sundial line was defined using a stretched cable, aligned on the two points.

In order to obtain a perfect horizontal line, a channel of water was created under the stretched cable, whose edges were built parallel to the liquid. As the works continued, in the area occupied by the water channel the stretched cable was replaced with a long iron line that concretized the real Sundial line.

On its sides were built two different paths made of marble plates placed one in front of the other.

A path was made of marbles and had a length of 2:100 in proportion to the Gnomonic Height, with their respective numbers written.

The other path consisted of marbles was as long as the tangent of each zenith degree provided by the instrument, so from 1 ° to 68 °, with the respective numbering written.

Externally to the Line were fixed marbles with the zodiacal signs referring to the dates of projection. Other smaller plates indicated the entire hours of the rising of the Sun. The conclusion of the work took place on December 21st, the day of the Winter Solstice, in which there was a great oval traced by the image of the Sun.

On that occasion, following dimensional checks, it turned out that the distance on the line between the vertical point and the center of the Winter Solstice corresponded to the six hundred thousandth part of the Earth’s circumference.

For the exceptional instrument’s qualities of being able to verify the size of the apparent diameter of the Sun, Cassini called it “Heliometer”.

With this Sundial the height of the Sun could be determined every day at Midday.

The results obtained with the Sundial positioned Cassini among the most authoritative astronomers of his century, in fact following the realization of the instrument, he was candidated to the direction of the astronomical Observatory in Paris.

With the Meridian, we obtain only the instant in which the Sun is “in Meridie”, thus when it crosses the Long Meridian. In other words, the moment of the Local real Midday.

The instrument is comparable to a horizontal Solar Clock, in which the Gnomon is not a pole but a hole placed in a very high situation, from which the solar rays, entering, generate a luminous cone that, when it projects to the ground, acts as “Dark Room” . 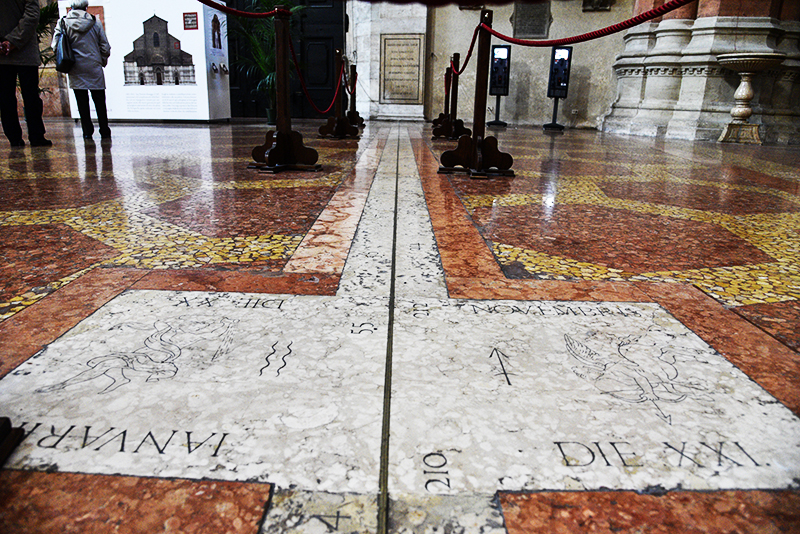 Shortly before Midday, when the Sun is able to enter through the opening, one can see its image projected on the floor. As the minutes pass, it gets closer and closer to the Sundial line.

In the exact moment in which it is centered, it is 12 o’clock and coincides with the maximum height of the Sun above the horizon.

The Meridian has two main functions: the first is to indicate the midday for each day of the year and the second one is goniometric: that is, the sun’s rays at midday have a different angle every day.

Already in the eleventh century the sundial was used to determine the precise date of the Spring Equinox, in view of a later calendar reform.

This latter would be possible only in 1582, with Pope Gregory XIII.

3. Restoration of the Sundial

In 1695 Cassini stayed briefly in Bologna. During his stay, he took care of the restoration of his Sundial, after receiving the Senate of Bologna’s permission.

He was assisted by his son Giacomo, by Domenico Guglielmini by the technician Egidio Bordoni.

The Gnomon was no longer its original height and the marbles had lost their initial stability.

Thus they measured the line and divided it in 100 modules, replicating it on a wooden rod. These modules were used for measuring the Gnomonic Height: the distance between the Sundial’s hole and the floor.

Cassini commissioned Guglielmini to continue his work, having himself to leave Bologna. Guglielimini’s work was to create a special sextant, to be used on the Line in the North direction. This would determine, by looking at the Polar Star by nightfall, the exact Latitude of the place.

To celebrate the great sundial and its builder, on that occasion a commemorative medal was coined and a volume was published explaining in detail all the characteristics of the astronomical instrument.

Moreover, against the adjacent pillar the starting point of the Line, a large marble plate was placed to remind posterity of the important work of Cassini. At its base of it was then inserted a brass plate long exactly 1 Module, divided into several parts. 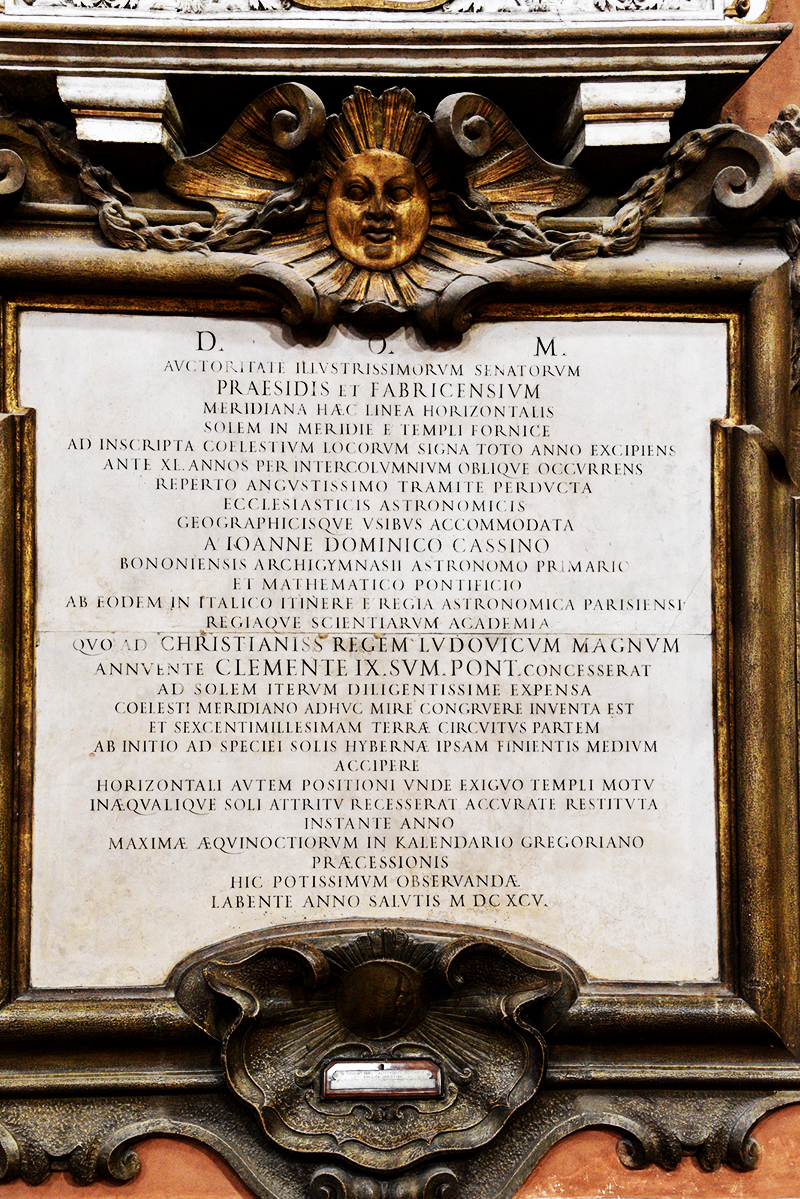 In 1776 the Senate of Bologna approved the reconstruction of the Sundial, which had been deteriorated for a long time

The task was entrusted to the great astronomer Eustachio Zanotti. He considered to completely renew the instrument, but to maintain however unvaried the fundamental dimensions established by Cassini.

Using the same tools created by Cassini, the Gnomonic hole was arranged at the perfect altitude, placing it also to the Line’s beginning of the vertical point.

The ancient marbles of the Line were removed to create a solid foundation that would guarantee the right stability over time.

The Cassini line consisted of two marble paths that flanked the central metal bar. To make the work more stable, it was decided to make a single line of marble as wide as the previous two.

To prevent the rapid deterioration of the metal line, it was built not of iron as the previous one, but with two thin brass plates that enclosed a central part in copper.

At the sides of the metal line two distinct numerical progressions were made.

On the East side, starting from the Vertical Point, the distances of two modules were carved in two modules, until the 250th module.

On the West side, the hours were written (in Roman numbers) and the minutes (in Arabic numbers) of the Midday instant, according to the italian Bell tower hour use.

The zodiacal signs were also placed on the appropriate points.

The line ends almost against the internal facade of the church, with the incision of the solar projection of the 1655 Winter Solstice traced by Cassini.

The Sundial was inaugurated on October 4, 1776. It was followed by a book that illustrated its characteristics.

From that date the instrument has not undergone any further transformation.

In 1904 the Geodesy professor Federigo Guarducci at the University of Bologna, published a series of surveys conducted on St. Petronio’s Sundial in order to define precisely the quality of the instrument.

In occasion of the 2005 manifestations held for the Cassinian Year to commemorate the 350th anniversary of the Sundial tracing, Giovanni Paltrinieri promoted a new verification of the instrument. The results were published on the book “Strenna Storica Bolognese 2005”.

The most significant data that emerged is a significant collapse of the entire structure on the North side due to subsidence: taking the “Vertical Point” as reference, it was found that the plate of the Winter Solstice was 42mm lower, against the 7mm found by Guarducci.