Basilica di San Petronio | Translation of the head
At his death, Petronio was buried in the Church of the Holy Sepulcher, but around 1400, it was decided to move the head of the saint to San Petronio.
7372
page-template-default,page,page-id-7372,page-child,parent-pageid-6949,ajax_fade,page_not_loaded,smooth_scroll,

TRANSLATION OF THE HEAD OF ST. PETRONIO 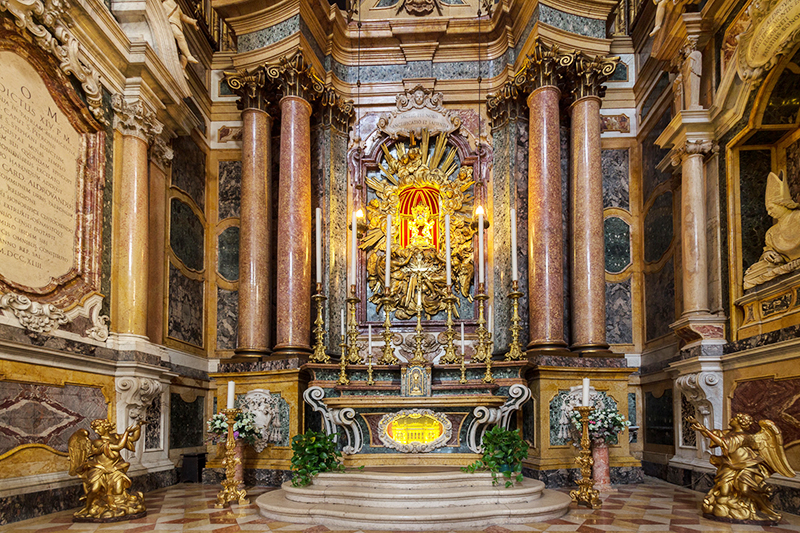 At his death, Petronio was buried in the complex of Santo Stefano, in the Church of the Holy Sepulcher, which he had built in the image and likeness of the one in Jerusalem. After his appointment as a saint and the construction of the basilica named after him, the first conflicts on his relics began to emerge. In fact, the City did not see favorably that the body of the saint was preserved by the celestine monks, therefore under the curia’s control.

In the fifteenth century something began to change: it was decided that on the afternoon of October the 3rd the head of the saint could be moved to San Petronio for the celebrations of the patron, and then be brought back to the monks the following day. All this with an annual payment of ten thousand gold shields. Only in 1743, thanks to Pope Benedetto XIV, former bishop of Bologna, the situation reached a turning point. Judging absurd that there was no relic of the saint in the church dedicated to him, but also to help the reconciliation between political and papal power in Bologna, the Pontiff forced the monks to surrender the head of the saint to the Petronian canonicals. The Celestines, however, to emphasize their disappointment, did not give the relic to the basilica, but directly to the pope, who had to build a new reliquary and donate it in turn.

The head of the saint was placed in the chapel of Cardinal Aldrovandi, today the chapel of San Petronio, and on the outer wall of the nave facing the Archiginnasio, at the tomb, was written “Pone Lapidem Felsinae Thesaurus”, that is” behind this stone is the treasure of Bologna “.