Basilica di San Petronio | The Main Door
The central portal of the Basilica of San Petronio, or Porta Magna, is considered a sculpture masterpiece of the fifteenth century, although, like many other parts of the building, it has never been completed.
7344
page-template-default,page,page-id-7344,page-child,parent-pageid-6949,ajax_fade,page_not_loaded,smooth_scroll, 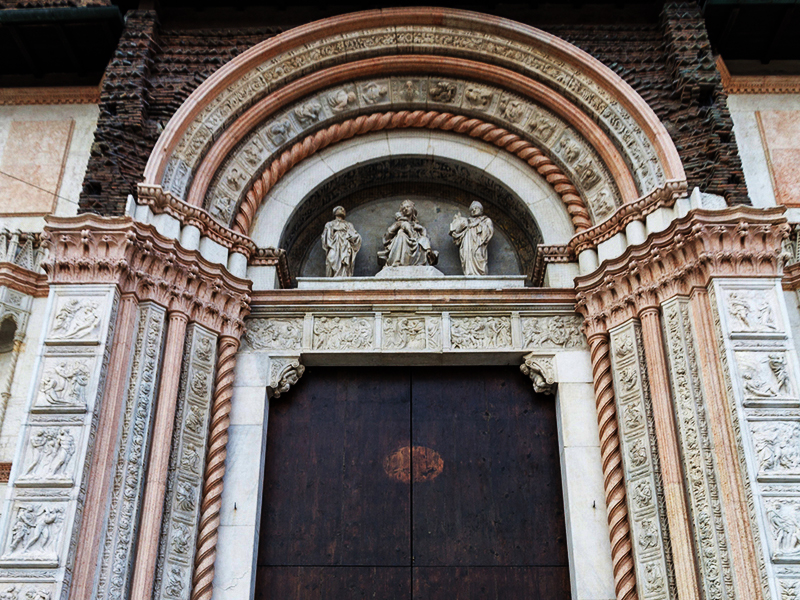 The central portal of the Basilica of San Petronio, or Porta Magna, is considered a sculpture masterpiece of the fifteenth century, although, like many other parts of the building, it has never been completed. In 1425 the work was commissioned to Jacopo della Quercia, who should have finished it within two years. What actually happened was different, however, because the artist was divided between Siena, a city where he had to complete some works, and Bologna, where the works of the “damned door”, as defined by him, continued so slowly that 1438, year of the artist’s death, the portal was not yet finished.

Jacopo della Quercia nevertheless succeeded in expressing his genius in the part of the work carried out. The protagonist of the door is the theme of redemption, which is represented, in the panels on the pillars, by figures of the Old Testament, and, on the architrave, by images of the New Testament. While in the lunette appear the in the full-relief sculptures of St. Petronio and around the latter are depicted the prophets, Sant’Ambrogio and a Madonna with Child.

The artist combined the Pisan-Sienese technique with the Florentine one, sculpting scenes without landscape, in which the characters possess a great dynamism and seem to want to leave the panel. This physical-spiritual tension will be caught by Michelangelo, who wanted to pay homage to it with a bronze sculpture of Julius II, that in 1510 was placed in a niche of the portal. Unfortunately, however, the work will be destroyed by the people only three years later.