Basilica di San Petronio | The Archiginnasio
In 1562 Papa Pio IV ordered the construction of the Archiginnasio, which rose in the area destined to the eastern arm of the transept of the basilica.
6977
page-template-default,page,page-id-6977,page-child,parent-pageid-6949,ajax_fade,page_not_loaded,smooth_scroll, 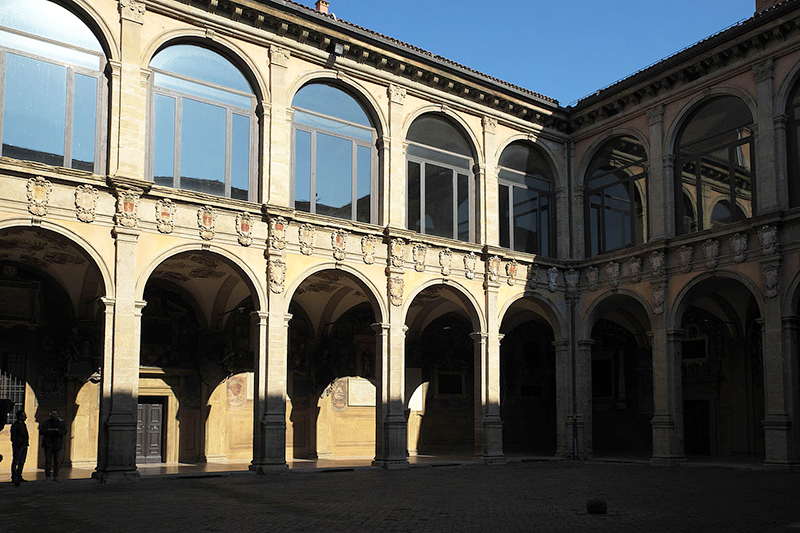 The political conditions of Bologna changed drastically in 1506, after the arrival of the ecclesiastical domination in the city. If you add to this a project of great difficulty with a very high economic expenditure, you can easily understand how the Basilica of San Petronio has remained unfinished

In 1562 Pope Pio IV ordered the restructuring of the entire area of Piazza Maggiore and the consequent construction of the Archiginnasio, which rose in the area destined to the eastern arm of the Basilica’s transept. The papal curia was in fact worried of a project that, if completed, would have built an even larger building than Saint Pietro’s in Rome. Thus, despite the protests of the citizenship and the contrary opinion of the Senate of Bologna, San Petronio remains in fact unfinished and the inauguration of the Archiginnasio, new seat of the University of Bologna, takes place in 1563.

The Archiginnasio remains the home of the Bolognese studium until 1803. From the middle of the century it houses the Municipal Library, the largest in Emilia-Romagna, remaining one of the most significant buildings in the entire city.