Basilica di San Petronio | St Petronio's Chapel
The chapel of San Petronio, second of the twenty-two totals, is famous for keeping the head and body of San Petronio.
7101
page-template-default,page,page-id-7101,page-child,parent-pageid-6949,ajax_fade,page_not_loaded,smooth_scroll, 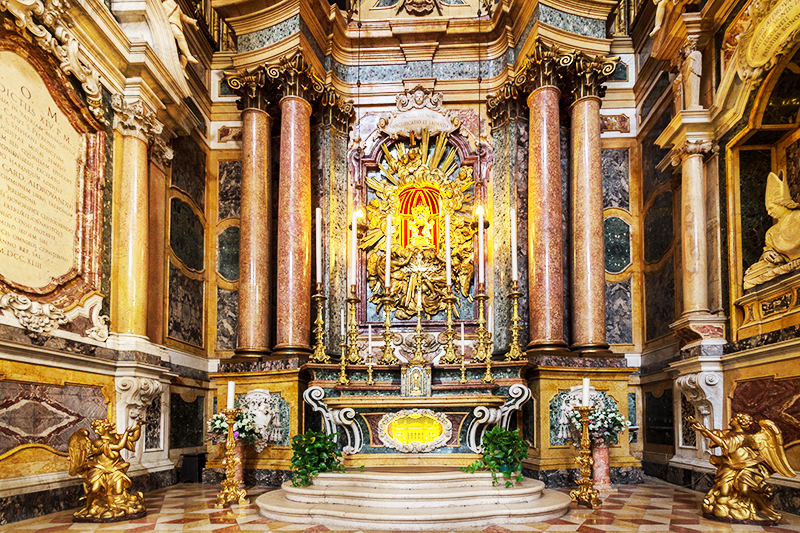 Containing the relic of the Saint to whom the basilica is dedicated. The Aldrovandi’s chapel, second of the twentytwo, is famous because it keeps the head and the body of St. Petronio, placed here respectively in 1743 and 2000. The chapel was commissioned to the prestigious bolognese architect Alfonso Torreggiani in 1742 by the cardinal of that period, Pompeo Aldrovandi. Many artists contributed to its creatio: sculptures and frescoes were accomplished. Among the artists, we find the brothers Ottavio and Nicola Toselli, authors of the two wooden statues depicting Religion and Wisdom and some stucco reliefsin both the walls, representing the two life periods of st. Petronio.

The detailed and well-defined paintings of the Torreggiani were used as a model by these authors to give life to what is considered one of the masterpieces of the Bolognese Baroque. This style can also be easily recognized in the statue of Cardinal Aldrovandi, placed in a niche on the right wall, and in his tomb, beneath the chapel. The sarcophagus dates back to the late Roman Empire. It has at the corners two little geniuses in relief and in the middle a medallion with the Madonna and the child.