Basilica di San Petronio | St. Ivo's Chapel
The chapel of Sant'Ivo is characteristic for the late Baroque style. Among the works there is the "Madonna di S. Luca e santi Emidio and Ivo" by Gaetano Gandolfi.
7132
page-template-default,page,page-id-7132,page-child,parent-pageid-6949,ajax_fade,page_not_loaded,smooth_scroll, 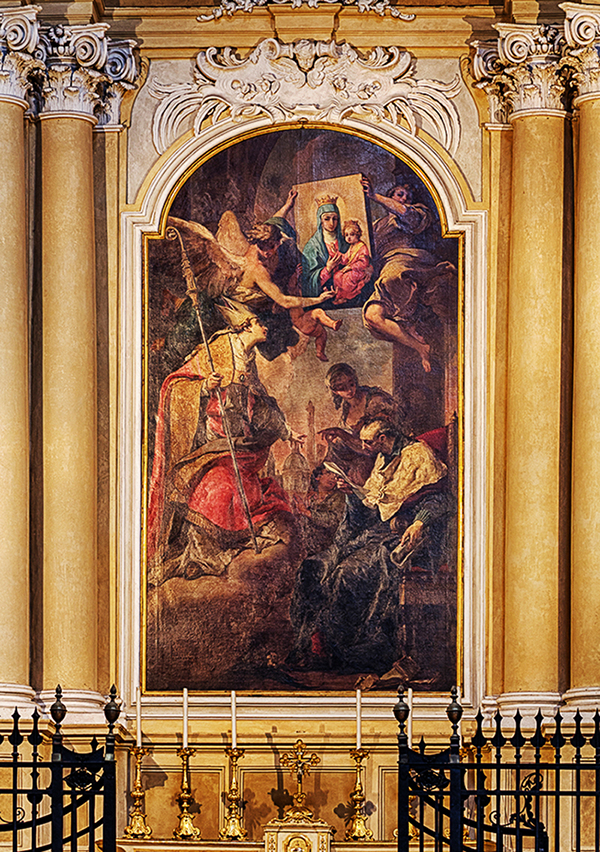 Squeezed between the relics of San Petronio and the frescoes by Giovanni da Modena, the chapel of Sant’Ivo is the third on the left, of the twenty-two. It is on the left, between the space dedicated to the saint and the Bolognini chapel.

Belonging first to the Foscarari, then to the Fabbriceria and in the past dedicated to Santa Brigida. A Characteristic of this chapel is the late Baroque style, thanks above all to the architect Carlo Francesco Dotti. Among the works placed there is the Madonna di S. Luca and saints Emidio and Ivo by Gaetano Gandolfi, who together with his brother Ubaldo was a great exponent of Bolognese painting in the second half of the eighteenth century. The painting represents Sant’Emidio, patron of earthquakes, who prays an icon of the Blessed Virgin of San Luca, brought by two angels, to protect Bologna, which is seen in the background, from all earthquakes. By Alessandro Tiarini, who is another bolognese exponent, is the other great work of the chapel “L’apparizione della Madonna a S. Francesca Romana”. Francesca was a Roman noblewoman, who at the beginning of the fifteenth century founded a congregation and dedicated her life to the poor.

Between the chapel of Sant’Ivo and the Bolognini there is a fresco by Giovanni da Modena, a large painting depicting St. Cristoforo with the annunciation of the Virgin’s immaculate conception in the overlying tonds. Last curiosity of this space are the two clocks, built in 1758 by Domenico Maria and Cristino Fornasini, which indicate the average time and the solar time.