Basilica di San Petronio | St. Giacomo's Chapel
The chapel of St. James is the seventh of the left aisle. The place where the remains of the Baciocchi Felice family, the wife Elisa Bonaparte and their children rest.
St. Giacomo's Chapel saint petronio bologna
7060
page-template-default,page,page-id-7060,page-child,parent-pageid-6949,ajax_fade,page_not_loaded,smooth_scroll, 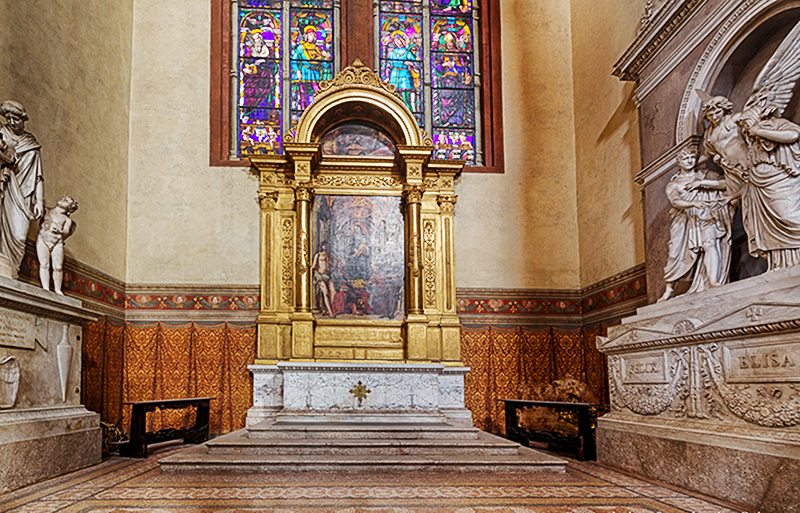 Belonging to Napoleon’s relatives it’s the seventh on the left. This space initially belonged to the Rossi family, but it was bought by Felice Baciocchi, husband of Elisa Bonaparte, in 1826. It is there that still rest the remains of the Baciocchi family: Felice, his wife Elisa and their children.

The Madonna, the Child and the saints Sebastiano, Giacomo, Girolamo and Giorgio dominate the altar and are the protagonists of the canvas painted by Lorenzo Costa in 1492. On the sides are the monuments that contain the remains of Napoleon’s sister and family. On the right there is the tomb of the Baciocchi and Bonaparte. In the monument, which was begun by Lorenzo Bartolini and completed in 1845 by Cincinnato Baruzzi, a disciple of the Canova, the two spouses are represented while they meet on the threshold of eternity. By Bartolini is instead the portrait of Elisa Bonaparte, placed next to her monument. On the left we find the graves of the three couple’s children, who died at an early age. The work was realized in 1813 by the will of the mother and was made by the sculptors Baldassarre Casoni and brothers Emanuele and Carlo Franzoni.

The treasures of st. Giacomo’s chapel are not over. Between the latter and the next one we can see the sepulchral monument of the bishop Carlo Nacci. A little further down, another peculiarity: the plaque that recalls the construction of the longest sundial in the world.