Basilica di San Petronio | Right lateral Door
The right lateral Door was designed around 1530 by Ercole Seccadenari and built in late Gothic style in the XVI century. To its realization many artists contributed, including Amico Aspertini and Girolamo da Treviso.
7328
page-template-default,page,page-id-7328,page-child,parent-pageid-6949,ajax_fade,page_not_loaded,smooth_scroll, 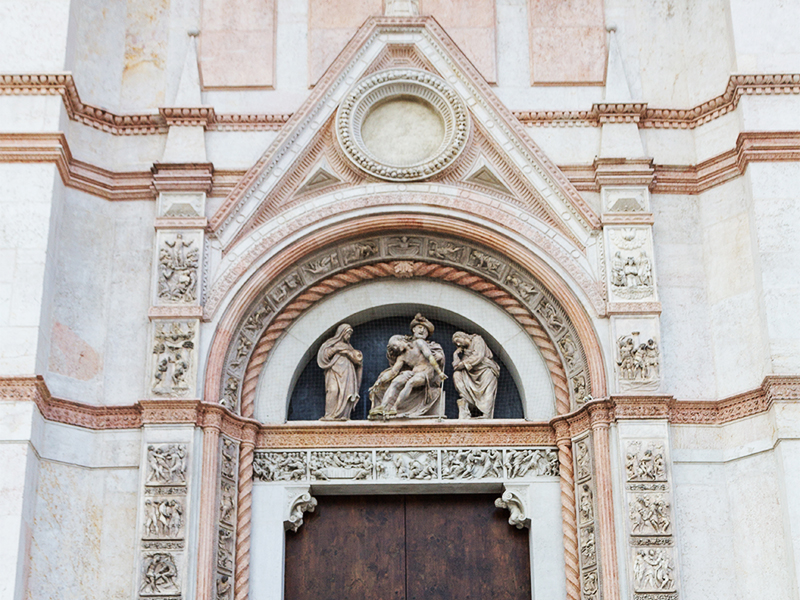 If the “Porta Magna”, that is the main central entrance to the basilica, is considered a sculptural masterpiece, not less worthy are the lateral doors. The one on the right was designed around 1530 by Ercole Seccadenari and built in late Gothic style in the XVI century. To its realization many artists contributed, including Amico Aspertini and Girolamo da Treviso.

In the pillars and the architrave are depicted biblical scenes and stories of many saints. On the left you can see some scenes of Giuseppe’s life, while the frame is adorned with scenes of the baptism and Christ’s transfiguration. In the right pillar, among the others, Simeone’s capture, Giuseppe’s dream interpretation of a baker and, above the molding, the flagellation of Jesus, added in 1557.
In the five panels of the architrave are the most important moments of the Passion, as the last Supper and Juda’s kiss. Above the molding, there’s the lunette, decorated with statues of Christ, the Madonna and San Giovanni the evangelist.

The right lateral door, as the entire base, is part of a style entirely different to the upper part of the basilica. The diversity between the Renaissance style and the late Gothic started some discussions about the work’s pursuance, ending up with wrecking the completion project. Moreover the lack of funding contrinuted to the facade’s realization failure, leaving it incomplete.