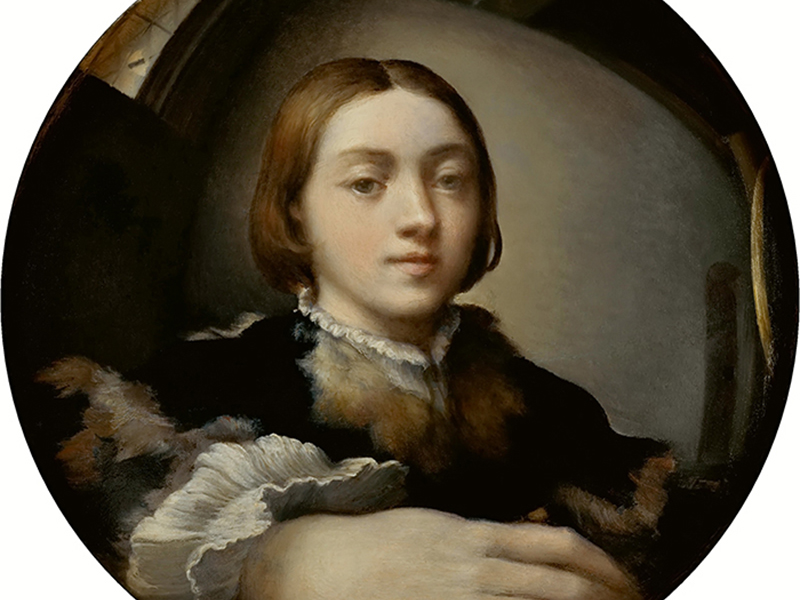 Girolamo Francesco Mazzola, known as Parmigianino, was born in Parma in 1503 from a painter father and showed an extraordinary skill in drawing already at a young age.

In the church of St. Giovanni Evangelista in his hometown, the decorations of several chapels will be commissioned to him, thus he’ll find himself working alongside Correggio, who in the meantime performed the frescoes of the choir and the dome. In 1524 he moved to Rome. Here his point of reference will be Raffaele’s masterpieces, as for the idealization of forms, harmony and softness. In Rome he will come in direct contact with the Mannerist artists Giulio Romano and Rosso Fiorentino and their presence will lead him to confirm and develop more and more a personal language, oriented towards gracious and refined elegance.

To escape the 1527 sack of the Lanzichenecchi, he moved to Bologna and here he will receive many commissions for portraits and works by Bolognese gentlemen and ecclesiastical administrations, such as the Madonna of S. Margherita for the nuns of the church of Santa Margherita, the Madonna of San Zaccaria for Bonifacio Gozzadini and the altarpiece of San Rocco for the homonymous chapel of San Petronio. Although he spent a few years in the city of Emilia (he will return to Parma in 1531), Parmigianino will hold the primacy of the Bolognese artistic environment for a long time.