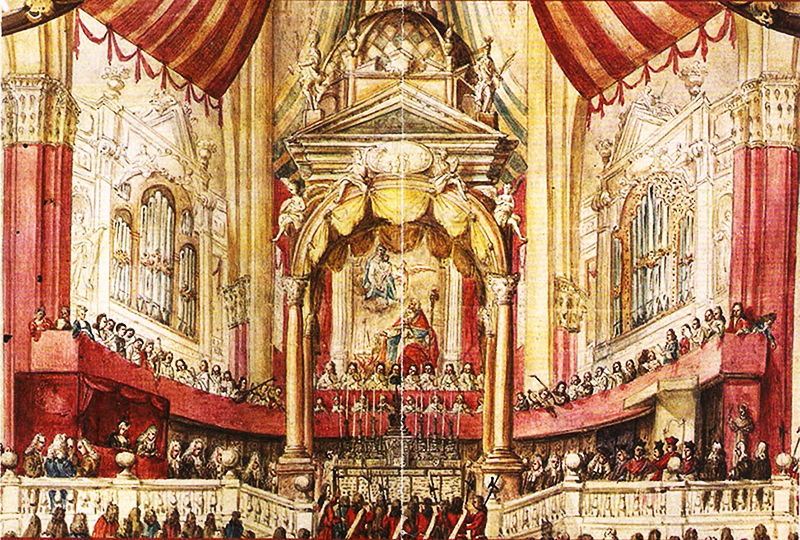 Music has an important role in the Basilica of St. Petronio. The bell tower and the so-called musical chapel are a proof of it. The latter was established by the will of Pope Eugene IV in 1436.

The first version of the chorus included eight to fourteen members, in addition to the singing teacher and organist. The first teaching was that of Giovanni Spataro, composer, teacher and author of theoretical writings. Only in 1657, however, with the appointment of Maurizio Cazzati, the chapel increased its prestige. In addition to a higher number of singers and the addition of instrumentalists such as trumpet players and pipers, Cazzati hired foreign musicians and soloists as extraordinary members added to the initial formation. In this way the pomp and importance of this institution grew dramatically.

Between the seventeenth and eighteenth century new musical forms were created such as the “concerto grosso”, thanks also to the contribution of nationally renowned masters among the lines of instrumentalists, Afterwards, between 800 and 900, there was an inexorable decline of the institution, due to both the diminished appeal of the genre, and the desire to reform sacred music to adapt it to a purely European style

The lack of tradition passing and the slow leaving of the singers marked the effective end of the Chapel, reduced to sporadic meetings on important occasions. However, in 1984 it was reconstituted and from 1996 it took the name of “Arcivescovile”.