Basilica di San Petronio | Jacopo della Quercia
Jacopo della Quercia is a classic example of genius and unruliness, he was appreciated by Michelangelo. His most important work is the Porta Magna.
7255
page-template-default,page,page-id-7255,page-child,parent-pageid-6949,ajax_fade,page_not_loaded,smooth_scroll, 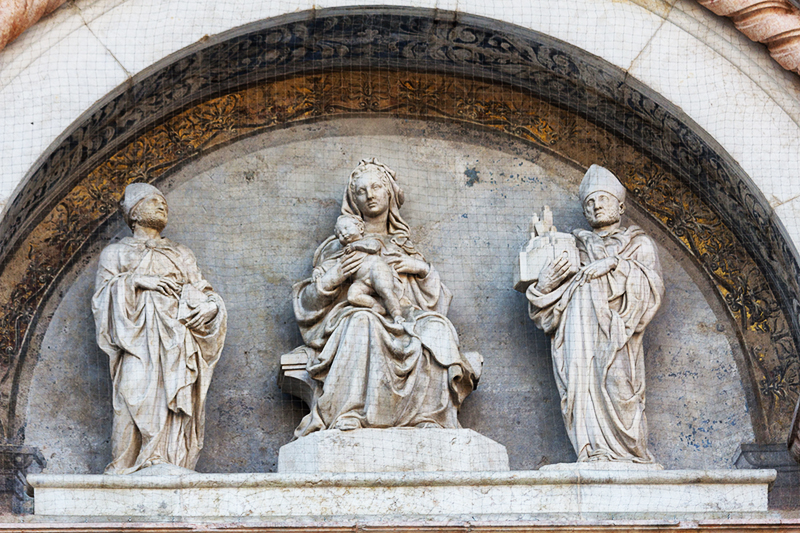 Jacopo della Quercia is certainly a classic example of genius and dissipation: if on one hand the innovative style and his works led him to be appreciated by an artist of the caliber of Michelangelo, on the other his problems to respect deliveries, his resentful and restless nature led him not to fully express his potential.

Della Quercia was born in Siena around 1374, son of a goldsmith, grew up in close contact with many artists from whom he learned the art of sculpting various materials. In 1387 he moved to Lucca with his family, from which he will soon be banned for beating a citizen. He took refuge in Florence, where he participated to the competition for the second door of the baptistery. In those years the sculptor continued to move from one city to another in search of tasks, so much that the first work attributable to him is is the Madonna of the Pomegranate located in the cathedral of Ferrara and, which he worked from 1403. Over the next years he sculpted many works dividing himself between Florence, Lucca, Siena and San Giminiano, until arriving in Bologna in 1425, to sculpt what should have been, and in part it is, the highest point of his career: the Porta Magna of St. Petronio.

His style was fresh and modern for the time, combining the classic with the international Gothic style, a fusion perhaps due also to his continuous moving. The municipality of Siena tried to tie him to itself, both to have a prominent artist, and to ensure that his works were completed faster. But Jacopo continued his pilgrimage, leaving many incomplete works on his death in 1438.