Basilica di San Petronio | Donatello and Porta Magna
The decoration of the Porta Magna, begun in 1425 by Jacopo Della Quercia, is unanimously considered the absolute masterpiece of the Sienese sculptor.
7189
page-template-default,page,page-id-7189,page-child,parent-pageid-6949,ajax_fade,page_not_loaded,smooth_scroll,

DONATELLO AND THE PORTA MAGNA 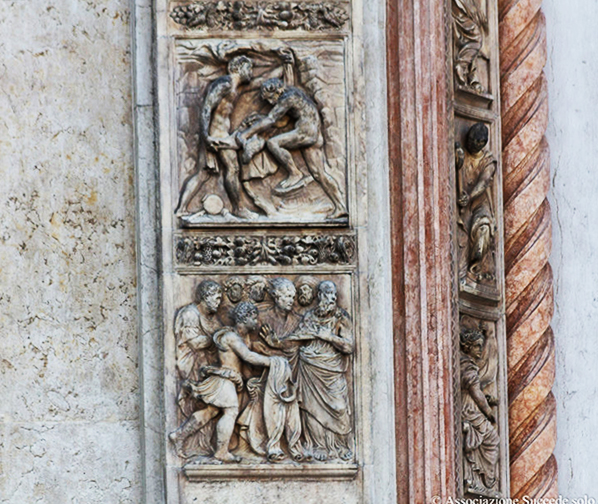 The decoration of the Porta Magna, started in 1425 by Jacopo Della Quercia, is unanimously considered the absolute masterpiece of the Sienese sculptor. A work so well done and impeccable that it influenced much a young and enthusiastic Michelangelo for the future composition of the Sistine Chapel: he had come to Bologna to study the extraordinary work closely.

There is also another important artist who somehow came into contact with the famous “Maledetta Porta” (literally, Damned Gate): Donatello. Della Quercia meets the Florentine painter in Siena, during the construction of the baptismal font of the Baptistery of San Giovanni. On that occasion Della Quercia was impressed by his works and got inspired for the panels gate in St. Petronio. The Sienese sculptor keeps his traditional style for the central portal, with panels dedicated to the stories of the Old and New Testaments, but we can see here and there some references to the art of Donatello, as the importance given to the background and the expressions of the characters depicted.

Turn back to San Petronio curiosities…