Basilica di San Petronio | Basilica’s Interior
The interior of the basilica has unique elements and is divided into a central nave, consisting of six bays, and two smaller side aisles.
7236
page-template-default,page,page-id-7236,page-child,parent-pageid-6949,ajax_fade,page_not_loaded,smooth_scroll, 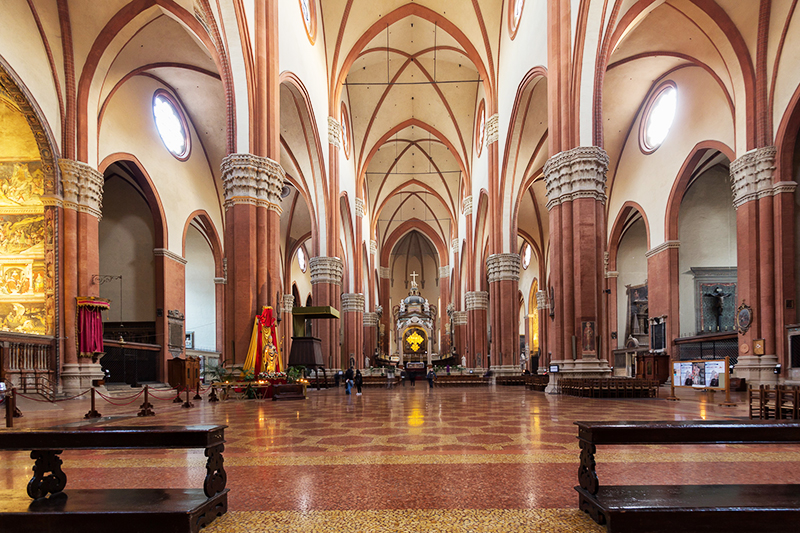 Gothic style, but different from the gloomy northern European. It is what characterizes the interior of St. Petronio. The church is in fact arranged along the north-south axis, unlike the classic east-west, and during the main hours of the day the light enters from the round windows of the naves and the windows of the chapels, creating light effects. The basilica is divided into a central nave and two smaller side ones. In the overall, the church is quite empty, but without appearing bare: everything is based on the white / red dichromia. In fact the red of the pillars is contrasted by the white of the walls, creating an effect of upward momentum, without seeming cold.

The real magic in the basilica is that which can not be seen: it is extraordinary that the six spans of the vault on the central nave are not out of tune with everything else, since they were built later than the rest. In fact, from 1646 to 1658, Girolamo Rainaldi directed the completion of the ogival vaults that closed the basilica, after many years in which it was discussed on what should be the height of the vault. Along the walls there are twenty-two chapels, including the Aldrovandi Chapel with the relics of St. Petronio. Among other things relatable to the design, there are the huge crucifix placed above the main altar, by an unknown author, and the largest sundial in the world, by Giovanni Cassini.