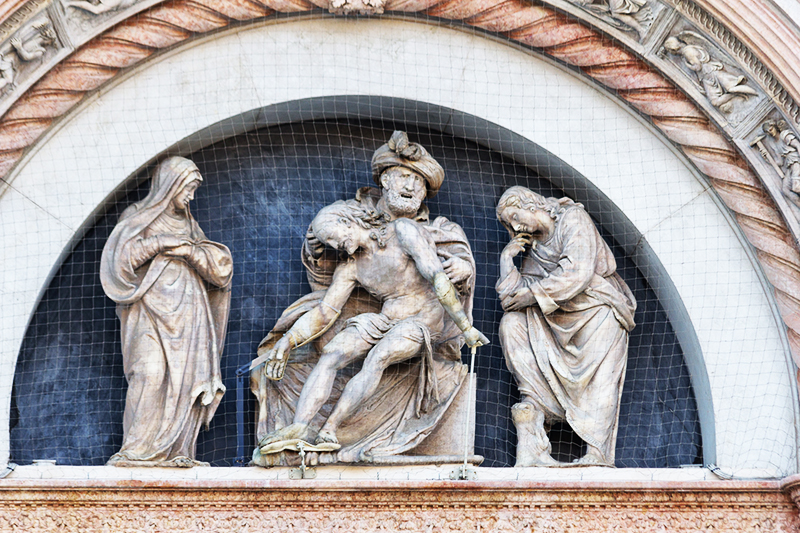 Inside and outside the Basilica of San Petronio there are traces of the Bolognese artist Amico Aspertini. The painter was born in the Emilian city between 1473 and 1475 and took his first steps as an artist in his father’s, Giovanni Antonio, shop. His first works in Bologna date back to 1503 and the artist won quite soon the trust of the most prestigious families in the city.

In 1504 he created the “Pala del Tirocinio” for the church of San Girolamo and Eustachio and from the end of 1505 he participated in the cycle of frescoes with “Storie di Santa Cecilia” in the Oratory dedicated to the Saint, under commission of the Bentivoglio family. After the Bentivoglio family being banned from the city, he moved for a short time to Lucca, but as early as 1510 evidence of the long collaboration with the Fabbriceria di San Petronio are found.

This year is when the David was carved in the intrados of Porta Magna, with its vibrant and moving drapery, its expansion beyond the frame, decorated with monsters and seahorses. For the smaller doors, however, in 1524 he realized the relief depicting the “Burying of the wife of Giacobbe”, in which the violent and dramatic pathos dazzle the eye. We find the same emotional intensity in the “Deposition of Christ”, sculpted by the lunette of the right door, where the faces of Christ and Nicodemo are deformed by suffering and pain.

Inside the basilica you can admire the “Pietà tra Santi” as well, commissioned by the Marsili family for the family chapel, dedicated to Sant’Ambrogio. The “Resurrection of Christ” fresco for the Madonna della Pace Chapel has instead been lost. In 1531 Amico Aspertini also painted four stories of the life of San Petronio on the sides of the organ box, built by Lorenzo da Prato.