Basilica di San Petronio | XXI. Chapel of Santa Brigida
The chapel of Santa Brigida, until 1415, was dedicated to S. Tecla, then Pepoli in 1568. On the altar is the polyptych painted by Tommaso Garelli 1477.
6535
page-template-default,page,page-id-6535,page-child,parent-pageid-62,ajax_fade,page_not_loaded,smooth_scroll,

During the general restoration of 1904, the fence was remade similar to the antiquity of the chapel of San Michele (the ninth chapel). The large window was reopened and the polyptych was placed on the altar, painted on a table by Tommaso Garelli (1477). Commissioned by the “sedici Riformatori dello Stato della Libertà” for their Chapel (X of Santa Barbara). 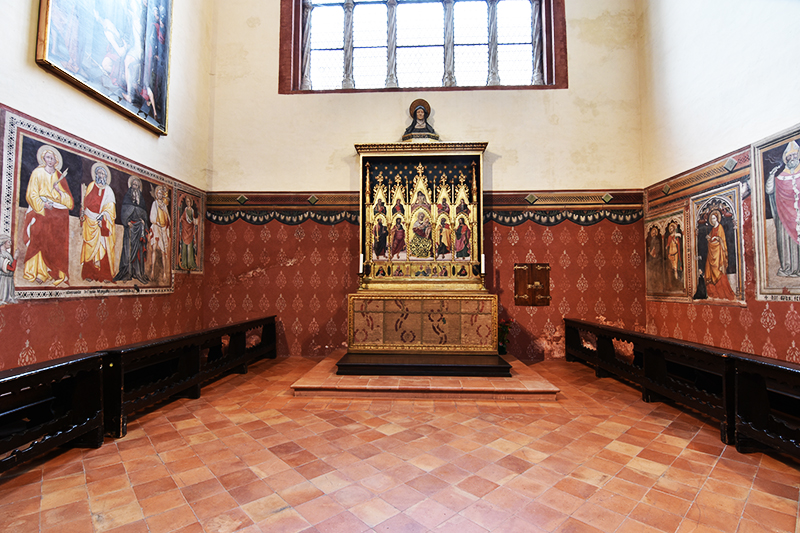 The precious paintings show both some Squarcione influences mediated through the art of Marco Zoppo, (painter friend of the Garelli) but also the knowledge of the works of contemporary Florentine artists.

In 1904 was also realized the chest that containis the polyptych by Giovanni Romagnoli. It has the overhanging bust of Santa Brigida in polychrome cotto. The brocade deck is of the sixteenth century. 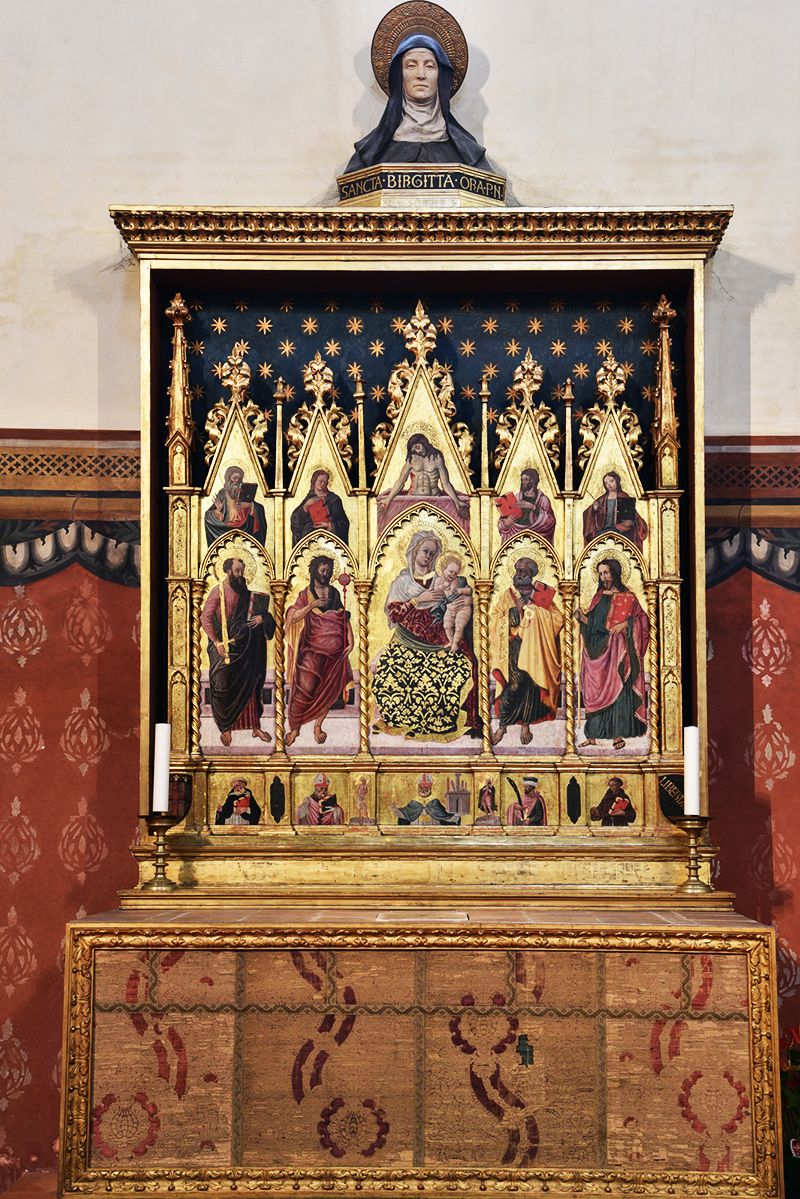 Very interesting are the votive paintings that adorn the side walls of the chapel. From the left they represent: Madonna with the Throne Son, highly remodeled, of an unknown author (1460-1465); St. Francis of Michele di Matteo (1430); S. Petronio graced by the pillory, perhaps by Giovanni da Modena (1415); the saints Giovanni Evangelista, Pietro, Antonio Abbot and Cristoforo with the Aldrovandi of Saracino, signed by Francesco Lola and dated 1419. Finally St. Catherine of Alexandria, very ruined, made by a pupil of Jacopo di Paolo (1420-1425). 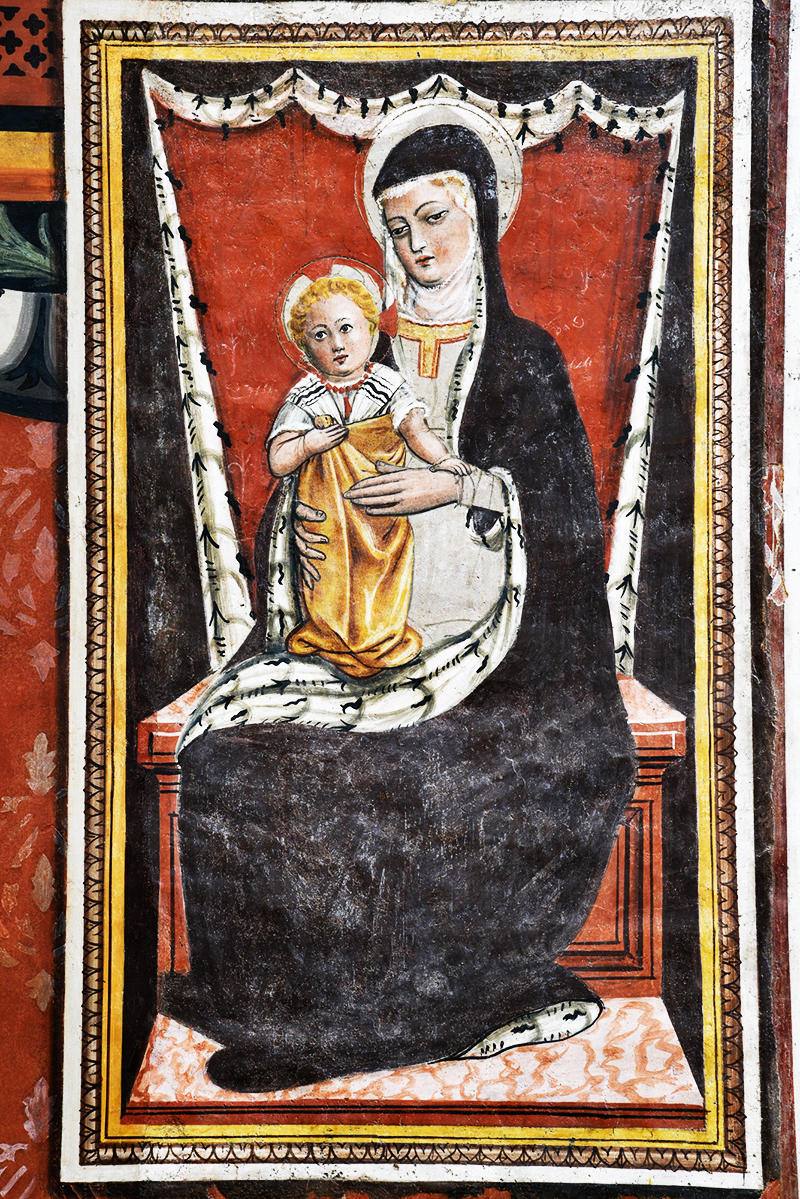 Next, on the right wall, a very ruined painting by an unknown author of the late 14th century.

At the pillar between XXI and XXII chapel, the last of the four medieval crosses transported here delivered in 1798. The Martyrs’ Cross (XI century), also known as of the Saints Fabiano and Sebastiano, previously placed in a dedicated kiosk, about half of today’s Montegrappa street.

It shows: in the foreground, the mystical lamb from which geometric rays of acanthus leaves spread; on the back, a regular wicker weaver in the vertical arm that turns into acanthus volutes in the horizontal arm.

On the cross, around the memory of transport in the basilica of the four ancient crosses, there are some frescoes dating back to the second decade of the fifteenth century, currently not in good condition.

On the sides of the memory are the figures of St. Antonio abbot and another unidentifiable saint. Below are the two scenes of the martyrdom of St. Caterina of Alexandria, signed by Luca of Perugia and the disbelief of St. Tommaso, opera by Giovanni da Modena.