Basilica di San Petronio | Main Chapel - St. Petronio's Basilica
The Altar presents a monumental crucifix and a dome around which are the statues of the four saints of the city.
main chapel altar in san petronio bologna
6282
page-template-default,page,page-id-6282,page-child,parent-pageid-62,ajax_fade,page_not_loaded,smooth_scroll,

In the oldest apse, the first tribune above the main altar of the basilica was raised between 1547 and 1549, but today only the four columns of Veronese marble that were reassembled in the new apse in 1662 remain.

In 1673, by the architect of Gian Giacomo Monti, the wooden dome was raised to a higher height through the four masonry arcades, all decorated with lovely stuccoes by Giovan Battista Barberini for the figures and Paolo Griffoni for the ornaments.

The Barberini placed around the dome the large statues of the four city’s saints: the Procolo and Florian soldiers to the major aisle, namely to the people, and the bishops Ambrose and Petronio to the choir and the clergy. Everywhere you can find angels, allegorical figures and medallions with stories of San Petronio, both externally and in the very elegant interior of the dome.

The monumental wooden crucifix with heads of cherubs painted in the heads of the cross placed above the altar is made by an unknown author of the fifteenth century, preserved until the last century in Sagrestia (restored in 1986 by A. Parlatore). 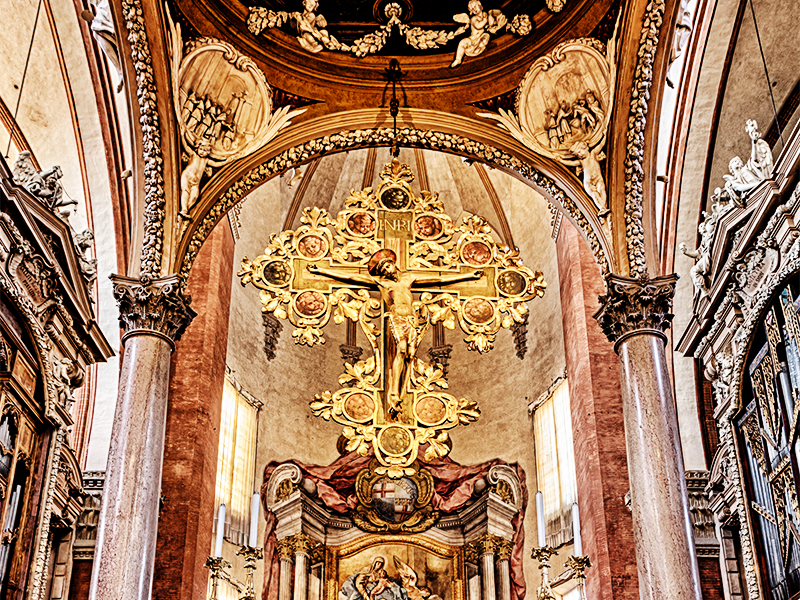 In the bottom of the apse the gigantic fresco representing the Virgin with the Child and San Petronio was executed in 1672 on cartoons by Carlo Cignani, Marcantonio Franceschini and Luigi Quaini for the great central scene and by Giacomo Alboresi for the ornate that frames.

The chorus was built and inlaid, with small perspective views of objects and architectures, by Agostino De ‘Marchi who worked on 72 scanners, two doors also inlaid with two capitals. 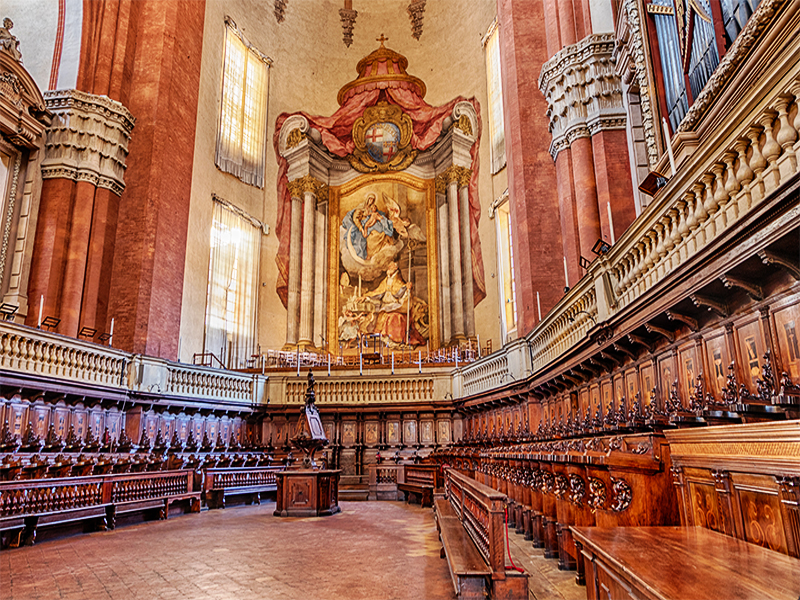 Between 1660 and 1661, during a general restoration, the last ten stalls were added to the choir on the right (excluding the capostal) which were ornamented by tarsie only in 1914 by Vittorio Fiori.

Of particular note are the two richly carved capitals, made by the famous painter Francesco del Cossa, depicting the saints Petronio and Ambrogio.

Of the two organs, the one on the right, dating back to 1475, was made by the organist Lorenzo di Giacomo da Prato, while Ercole di Francia carved in the wood the refined triangular gems that framed the pipes of the facade and which were gold plated by Giovanni da Ravenna. 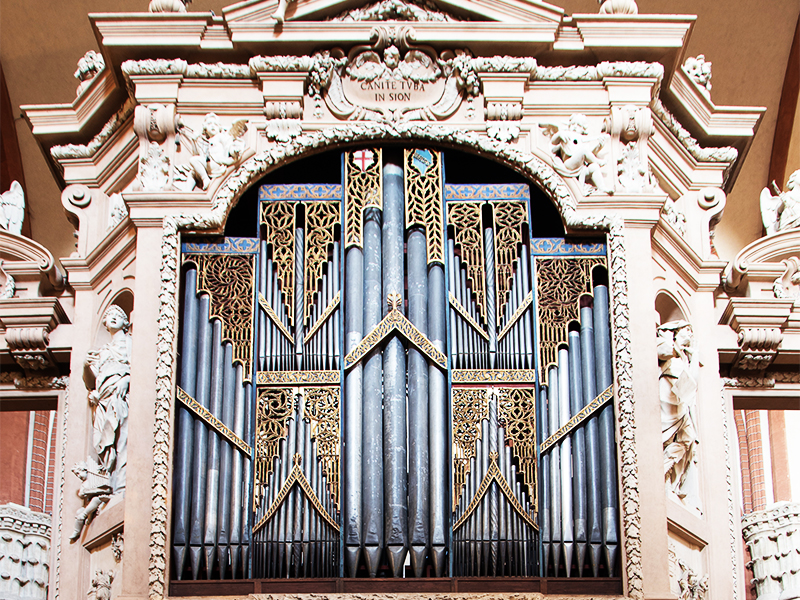 In 1674-1675 the organ was enclosed in the imposing Baroque casing, made by Giovan Battista Barberini for the figures and Paolo Griffoni for the ornaments under the direction of architect Gian Giacomo Monti.

The two statues on the sides represent S. Celilia and the prophet Geremia. This organ is certainly one of the first made in such dimensions and the oldest that has survived; the very first between large organs to be built on independent registers.

The left organ was later built in 1596 by the organist Baldassarre Malamini da Cento. The two statues that flank him, depict King David and St. Caterina de Vigri. The organs have undergone a very thorough restoration between 1974 and 1982, and so have the crates and ornaments.

At the entrance of the chapel are the two marble statues of San Francesco and Sant’Antonio, works by a sculptor from Verona, so called Girolamo Campagna (circa 1620).

The staircase of the presbytery and the balustrade date back to 1658-59, designed by Gaspare Vigarani, an architect from Modena; the carpenter Marco Paganucci performed the wooden balustrade.

In the winter canon’s chorus (entrance on the bottom of the aisle) is kept a painting on the table with San Petronio in ecstasy, by Francesco Mazzanti (1523), which Domenico Viani, in the second half of the seventeenth century, gave greater focus to.

There is also a large canvas representing San Giuseppe with the Jesus child, painted by Giuseppe Antonio Caccioli in the first half of the eighteenth century.
On the exit door at Corte Galluzzi, at the bottom of the right nave, is framed by a great ornament performed at the end of the eighteenth century, on the design of Francesco Tadolini, with statues of his Brother Petronio, depicting Jesus Christ, St. Peter and St. Paul, above the pediment, and in the medallion the delivery of the keys to St. Peter.

Outside the same door, above the tholobate, there is a rectangular canvas, obtained at the beginning of the nineteenth century, adding a glory of clouds and angels around an older image of the Eternal Father attributed to Amico Aspertini.

Above the door of the sacristy, is situated St Petronius, kneeling in front of Our Lady with the Child (circa 1736), made by Cristoforo Terzi (about 1736).