Basilica di San Petronio | IV. Chapel of the Magi
Chapel of the Magi, known as the Bolognini chapel was built around 1400 by Antonio Vincenzo. Inside you can admire the windows, the polyptych with 27 figures...
6108
page-template-default,page,page-id-6108,page-child,parent-pageid-62,ajax_fade,page_not_loaded,smooth_scroll,

IV. Chapel of the Magi

The only chapel of the Basilica that preserves (almost intact) the decorations inside of it, belonged to the Bolognini family, then to Salina Amorini. Closed inside a Venetian marble transenna of the Veronese, bearing the Bolognini family crest, it was made around the 1400s by Antonio di Vincenzo. The transenna demonstrates the high qualitative level that Bartolomeo Bolognini wanted to achieve by decorating it.

The golden inscription engraved on the frieze recalls a general restoration of the chapel wanted by the Marquis Augusto Bolognini Amorini between 1875 and 1879. On the stand you can see, repeated in various shapes, the crest of the family. The door casements are the original ones as well.

The tombstone of Bartolomeo Bolognini is also of the 1400s , made by an unknown Florentine sculptor. The chapel is enriched by a polyptych with twenty-seven wooden polychromatic figures, attributed to Thomas da Baiso and painted by Jacopo di Paolo, whom depicted in the dais the stories of the Magi (the journey of the Magi from the East to Bethlehem, their meeting with Herod, the gifts offering to the Child Jesus and returning) and in the corners of the pillars a large crowd of prophets and saints. 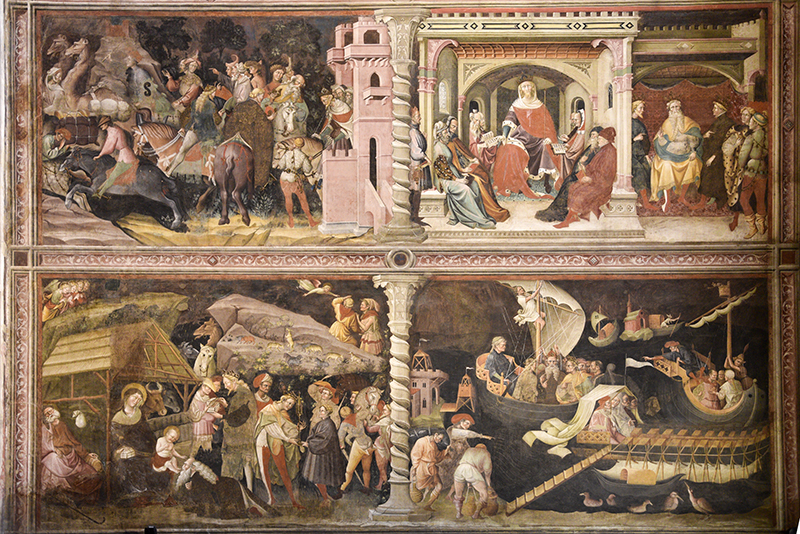 Of the same period are dated the large polychrome windows painted on the design of Jacopo di Paolo and representing: the Christ in glory in the major rose window; the Annunciation below in the quadrifora and twelve figures of saints with their monumental thrones.

It is believed that they represent the twelve apostles, with St. Paul in place of Judas, but in various ways the identification is impossible because of the lack of certain iconographic attributes. The recognisable one are: from above and on the left, the saints Giacomo, with the pilgrim’s stick; Peter, with the two keys, Paul with the sword, the instrument of his martyrdom, as the next Simone, with a saw; in the second register there are two unidentifiable figures, then Thomas with the team and Bartolomeo with the knife; in the lowest register the only identifiable is the third, St. John, for he brings a cartouche on his knees with the first words of his gospel: “In the beginning.”

Over the course of their six centuries of life, the windows have undergone considerable damage: already on February 24th, 1530, the artillery strikes and the arquebusades shot by Antoine of Leyva, to celebrate the imperial coronation of Charles V, which produced large cracks then repaired inadequately, and other minor injuries followed in the following centuries, so in 1879 the windows were subjected to extensive restoration.

Only a few years later, between 1408 and 1420, Giovanni da Modena carried out the fresco decoration of the walls. Moving from top to bottom, the painter represents: in the left wall, the Trinity and the Coronation of the Virgin between the nine Hierarchies of the Angels, the Archangel Michele, and finally the Inferno, where you can see: on the top and on the left, the scimatists, the sacrileges, the charmers, the idolaters, the heretics, and finally Simon Magician; underneath, on Lucifer’s sides and those who pay off capital shortcomings. 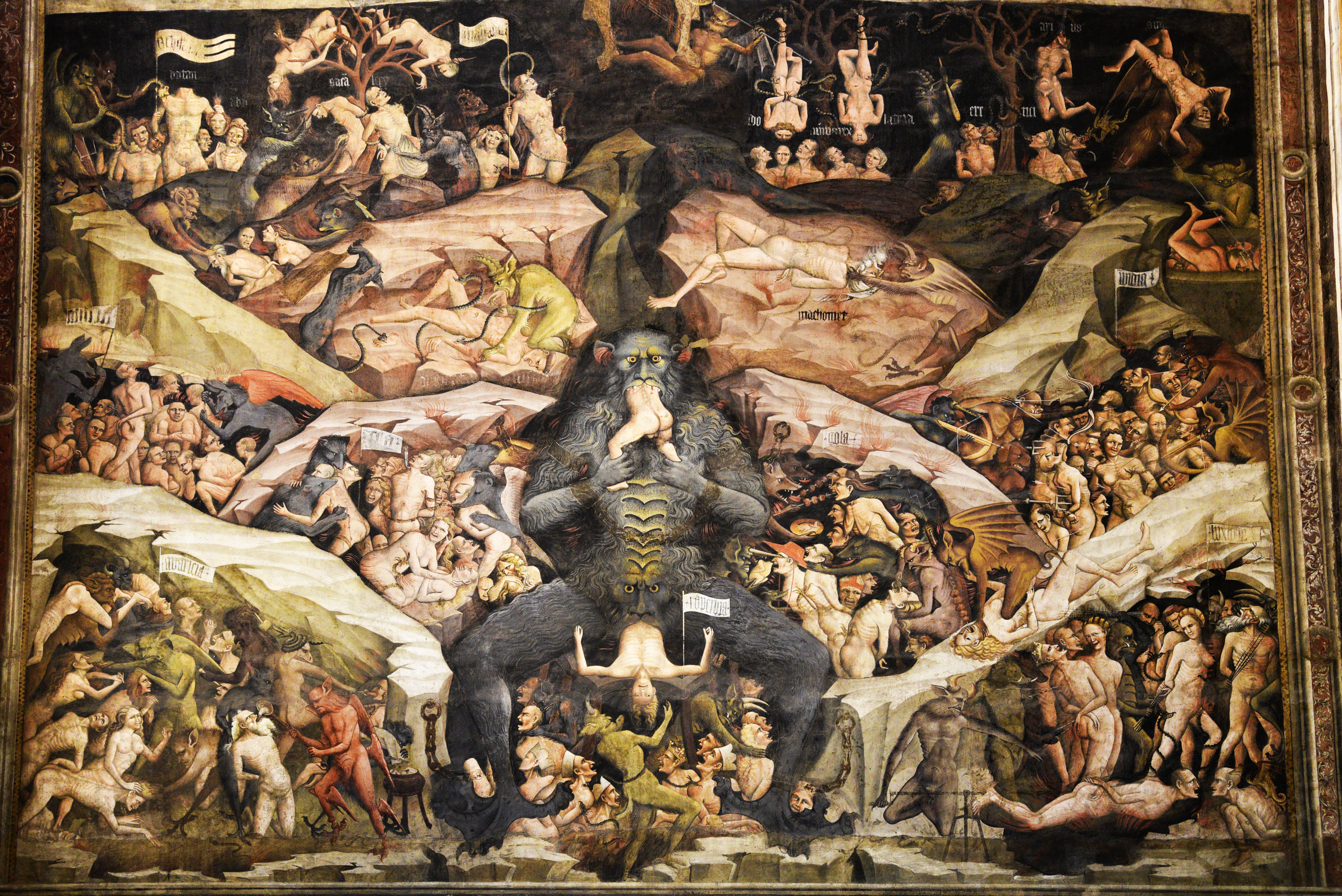 On the wall of the altar above the stained glass window is represented the election of San Petronio as bishop of Bologna as a prefiguration of the nomination in 1412 by the bishop of Bologna Giovanni di Michele by Giovanni XXIII and the stories of St. Petronio: in the entrance wall, inside, universal judgment and prophets, in the undercut and in the pillars of doctors of the Church and saints, in the celestial vault are represented eight figures of saints.

Between this chapel and the following there is a wooden statue of St. Petronius of the end of the thirteenth century, painted by the “Bagnacavallo”.